More Than A Feeling 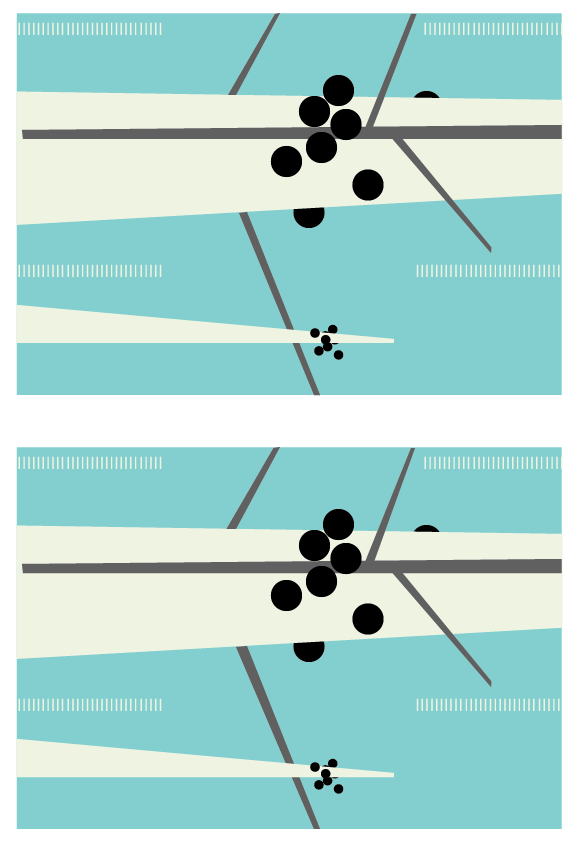 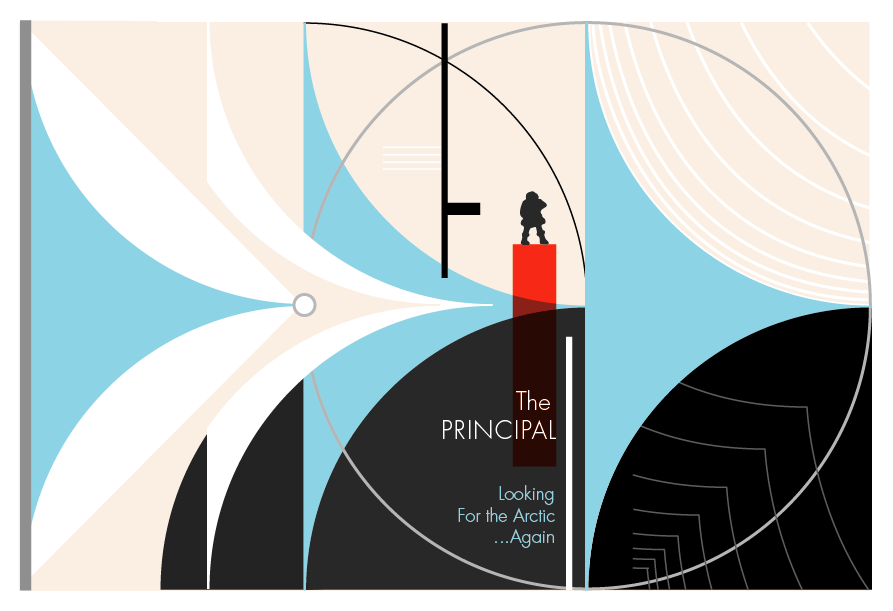 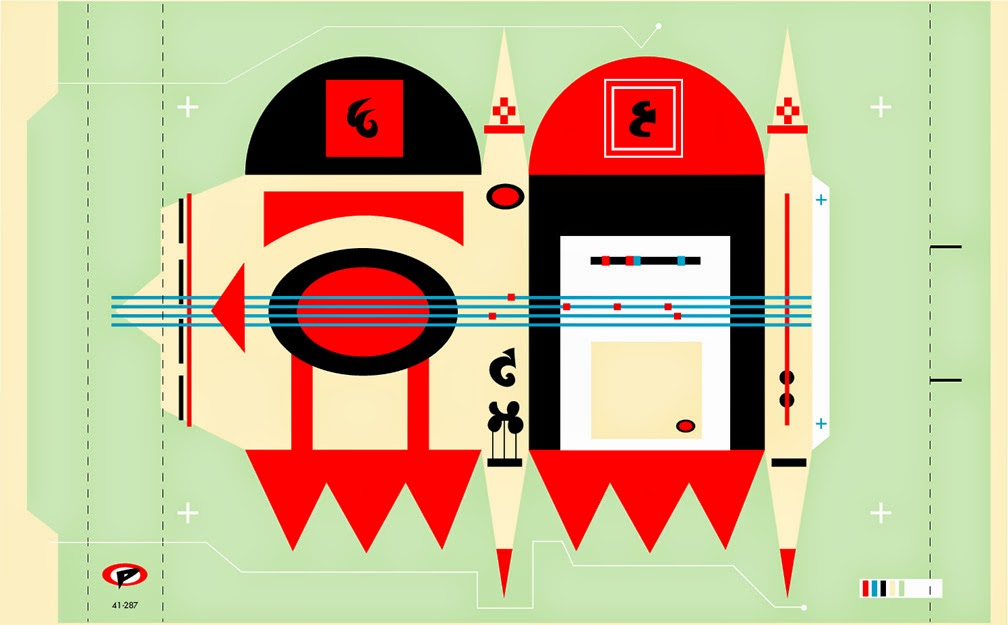 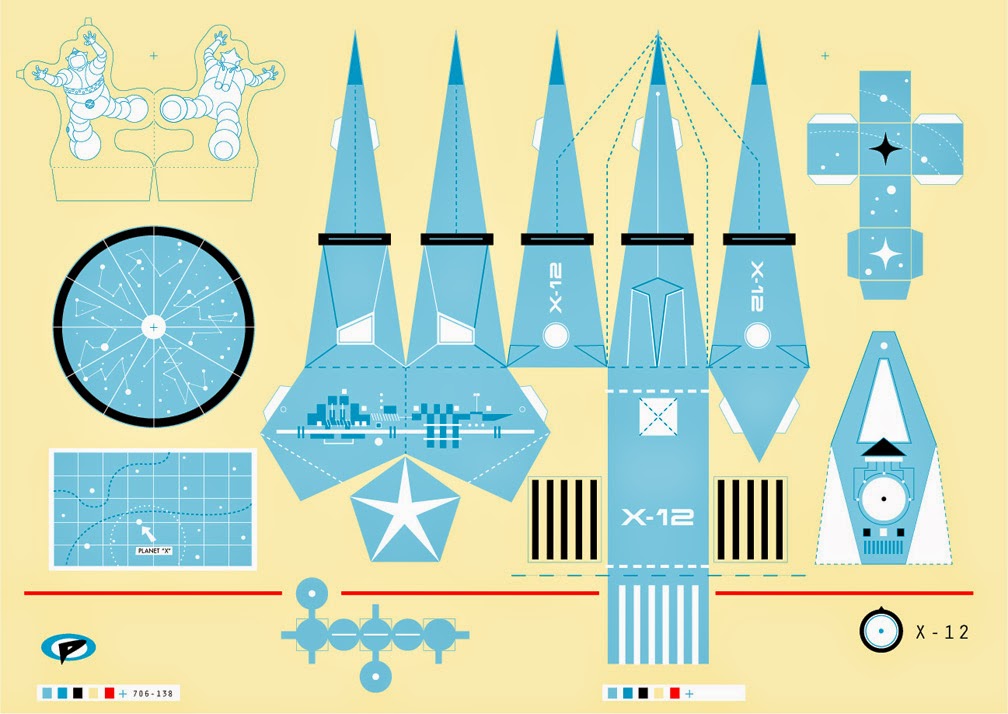 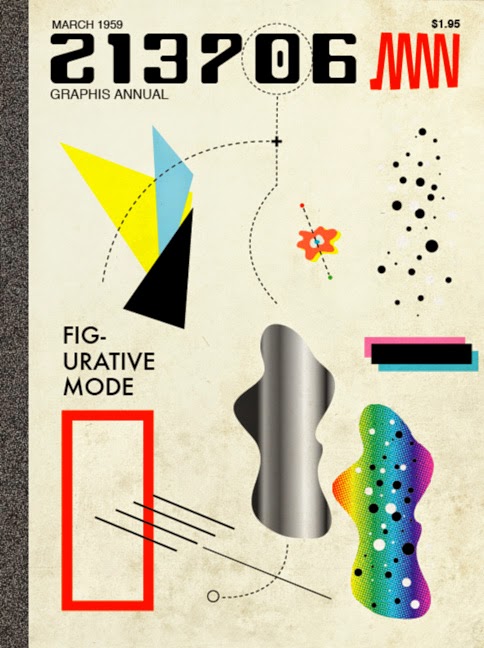 Most of the time in the work that I do, I create from memory on the spot. What comes along with this is a feeling, an inkling and urge to do something and then as if in a trance it kinda spills out of me. This process is not totally without direction as there is an inking of a thought, whether I want to draw a rocket an organism an abstract or a monster and I'll hash this out until the feeling is satisfied. When that feeling of satisfaction is finally there I'll find myself faced with something that seems as if I've experienced before but at the same time it's all very new to me. Posted by Robert Pasternak at 8:46 PM 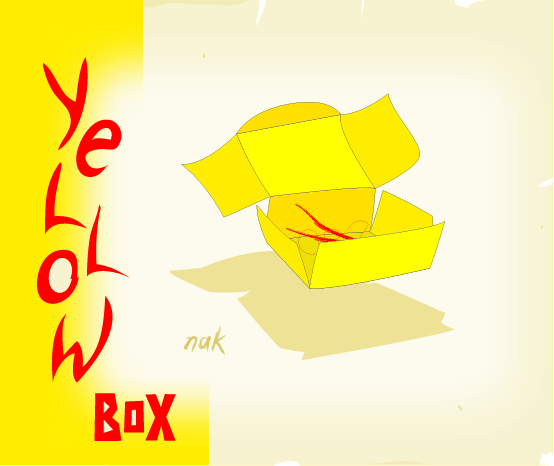 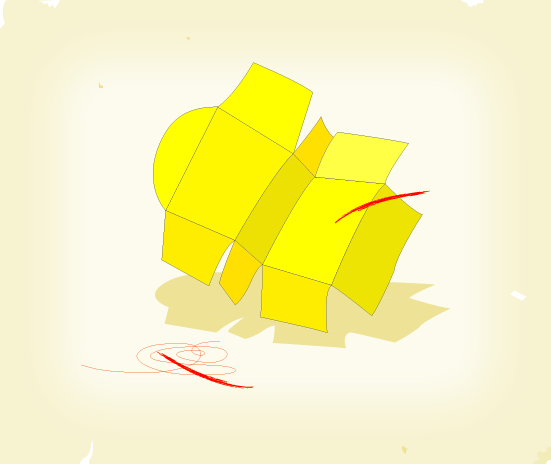 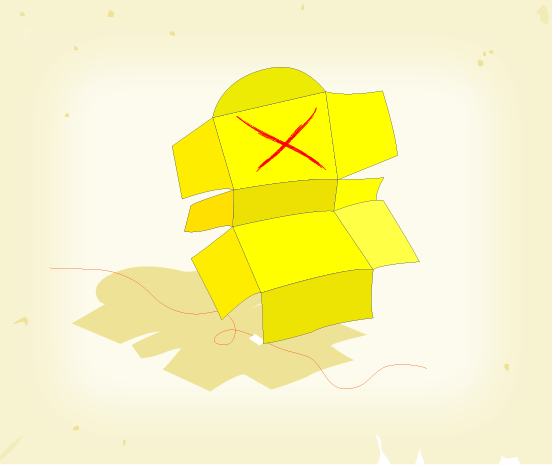 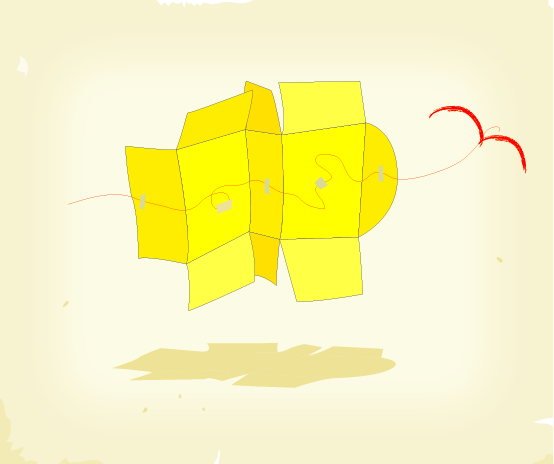 I am continually blown away by the creative process! There have been so many works that just pop out of me of which I was not expecting or planning to do. These just seem to unfold out of thin air and for this I am truly grateful. Yellow Box is one of these works.

For the past year I have been exploring and creating abstract comics. In have also been playing with forms of packaging for quite a number of years and I was particularly thinking about abstract packaging as of late.

After just finishing a few packaging related pieces and on an unexpected day off from a Saturday work day I decided to redraw in Adobe Illustrator a little wonky looking drawing of an opened and flattened box, not really knowing what I was going to do with it.

Right away it seemed to me that it was animated, moving and telling me something. This box is pretty much how you see it in the second panel of the comic. I quickly copied it and rotated it and put it beside(3rd panel). It was moving.

The idea of a discarded box blowing, flying in the air was there, then at one point it looked like a kite, which then brought in the rest of the pieces such as the string, tape and the little ribbon thingys you see on classic kite images. My ribbons are more like feathers though.

Now, it's interesting, that the first panel was the last one conceived. The 2nd, 3rd and 4th panels were all done in sequence as you see here except that in the 4th panel, at the forward end of the string where the 'bird' is, I had originally had the X from the second panel repeated. This was all fine until I completed the comic by creating the 1st panel and then looked at the whole thing again.

I saw that the image/idea of the X was fine in the 3rd panel but in the 4th panel I felt that I was bothered that the box was still being pulled/guided by this X. Then in a stroke of inspiration this X turned into a bird and by doing so magically transformed this otherwise plain sequential strip into something meaningful. For me it was as if a switch was turned on and there was a whole layer of meaning that I had not seen while creating it. Yeah it's kinda corny, but I'm an emotional guy and I was literally swept up in this Holy flood of tears.  It was just so beautiful, transformative and I guess that personal.

I find it interesting that I fumble along and I create this. Where did it come from? From outside of me or from the inside of me? Perhaps a fusion of both with my hands in the middle. I do believe that I am a channellor of sorts as I have witnessed this in other works of mine. This comic is also unlike most of my work.

I may not find out the answer to this, but I do know that this comic really lifted my spirits and also made me thankful that I did not have to go to work that Saturday. I also know that if I had re-drawn that box sketch on any other day, I would have had either nothing more than a sketched out flattened box or quite possibly some other Fantastic piece of art. The feelings and connections on any other day would have been completely different.

On another cosmic note.
Not that I was trying to do so, but it has been exactly 1 year since my previous post. Exactly.!?
Cycles.
What have I been doing?

Well, simply, about 200 new works, depending on the importance that I want to put on them and depending upon what constitutes a new work. I just can't put everything up, nor do I have the time for it all.

So, in the following posts, you will see new work or you will see some not-so-new work. In my world, it really does not matter.

Posted by Robert Pasternak at 2:43 PM 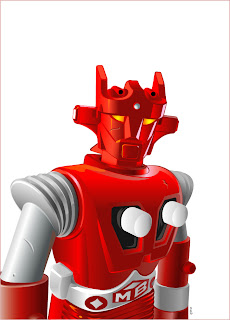 Mach Baron - vector art by NAK
10 years ago while I was in venice for a film festival, I bought myself a little metal/plastic robot. I had no idea who it was until recently when I saw some pictures in the new Famous Monsters magazine. There was an article specifically on this guy and his predessor the Red Baron who was from a Japanese animated kids show. This guy here is Mach Baron. Finding this out gave me some inspiration to create an illustration of him. I didn't want to do a static pose that would make it look like just a toy. I wanted it to have some movement and also showing some emotion. I also didn't want an action fighting image either. In reality within the show, he is a controlled (static) giant robot fighting no good, so I was exercising some creative license and bringing him down to our size as if there was a person in a robot shell.
I took some close up photos of my 2.5 inch Baron and was amazed at how just a slight angle change made such a dramatic emotional shift in the reading of the figure, which of course makes sense. It's all in the body language. So even though it was the same figure with no facial change, one looked like he could beat the crap out of you and another looked like he was bugged that you stopped him to ask for an autograph or something.
I was intending to do a background, which I started, but I was coming up with too many options to decide on a specific one. The white background also looked really nice so just as a default this is how it is for now. 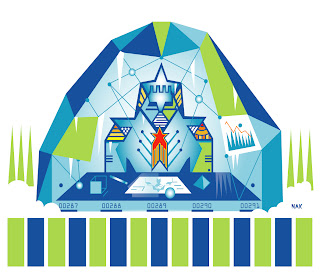 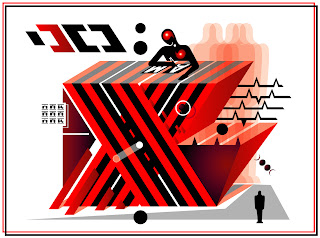 After the design I did in the previous post which I turned into a MEME poster, I took the design into another direction which I also quite like. This could easily end up as a cover for one of my Acid Man books.

Posted by Robert Pasternak at 8:48 PM 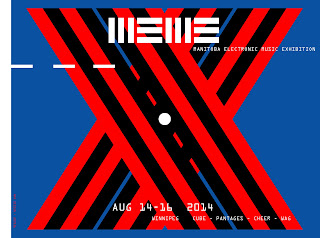 Manitoba Electronic Music Exhibition is happening this weekend and just for kicks I added some typography to a digital image I made earlier this week. This event is turning out to be quite the festival bringing in some top name acts in the industry. Check out this years event this weekend here in Winnipeg. http://www.memetic.ca 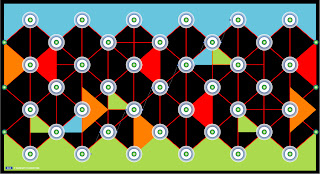 It Does Not Happen To Everyone
I created this graphic just after the MEME poster. I've always loved colorful geometric design work such as in charts and diagrams from my school day textbooks, but I think it goes even further into my background from being Ukrainian and growing with Ukrainian Easter Eggs.
Posted by Robert Pasternak at 4:03 PM 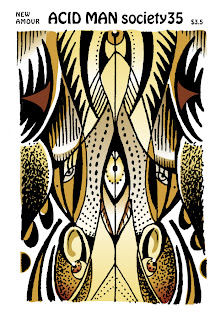 Cover for a new issue of Acid Man which is chock-full of new ink drawings, symetries and abstracts. 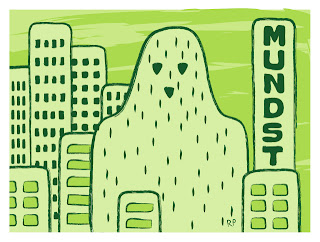 This cover is for.....is for what?......I don't know? I just get asked to do stuff. Just kidding. Just goofing around. Possible cover or panel for an Acid Man comic I may or may not do.

Posted by Robert Pasternak at 8:41 PM 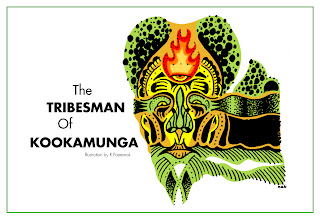 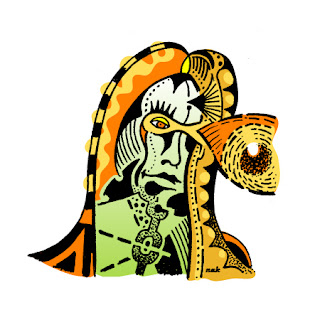 A couple of Ink Doodles I did over the holidays that I enjoyed enough to color and also just having fun with the title.

Posted by Robert Pasternak at 7:17 PM 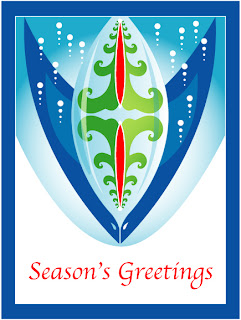 I wish you all the very best of the season and I hope you all have a wonderful New Year! 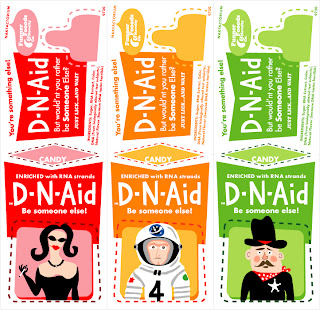 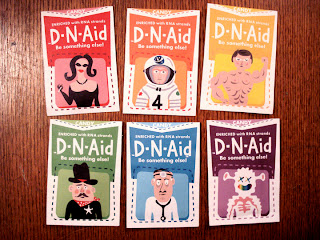 D-N-Aid is Nakfactorium's newest novelty item. Do you dare to try it? You can change who you are, just in time for the New Year! These are some of the packages I made just as a gimmick. I was thinking about Kool-Aid drink mix and the Lik-m-aid brand powered sugar candy. My designs are in the style of my memory of the Lik-m-aid packages from the time when I was buying them as a kid. 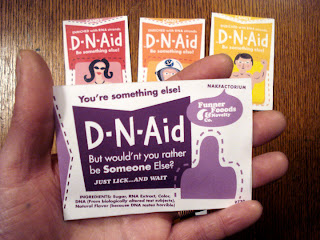 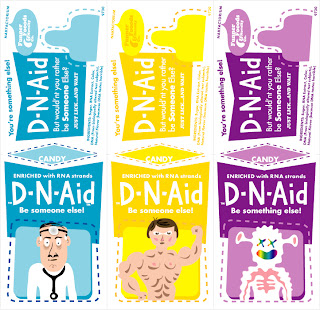 Posted by Robert Pasternak at 9:06 PM

Robert Pasternak
Robert Pasternak was born in Winnipeg where he continues to live and work. He is a truly unique character inside and outside the visual arts, building a long and diverse career. Pasternak can be described as a colourful eccentric who moves seamlessly from graphic design and inventive new novelty products to hand drawn portraiture, metaphysical paintings and science-fiction illustration or to hand-processed film and collage with found materials. Guided by a mix of new age philosophy, comic book ambition, and a fundamental belief in the interconnectedness of events and all things, Pasternak creates a makeshift universe where his work and audience can meet. His studio and personality reflect this practice, filled with salvaged material, vintage memorabilia, and millions of projects on the go.